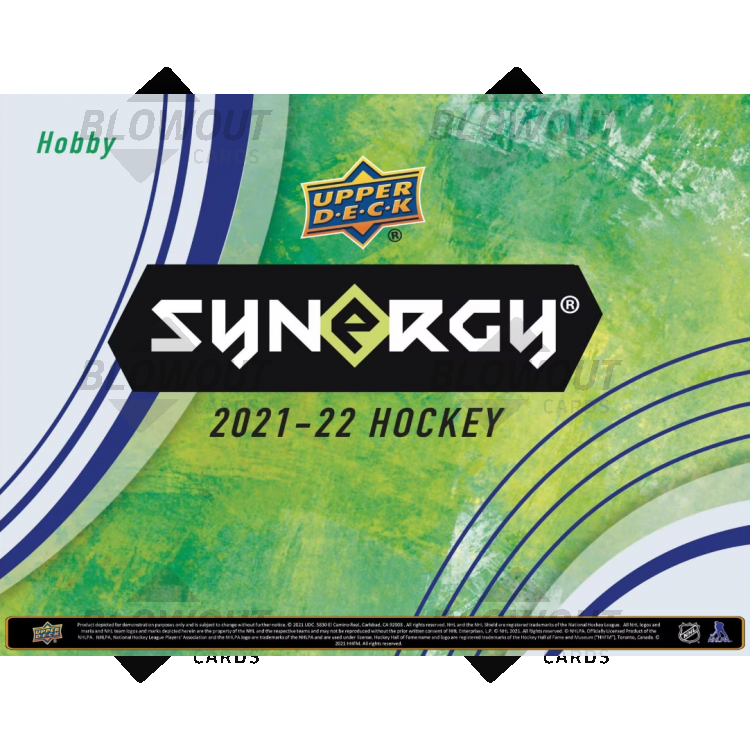 PRODUCT HIGHLIGHTS
- 2021-22 Synergy boasts a 125-card Base Set featuring veterans, legends and rookies (regular and SP). The veterans and legends are #’d to just 12, and the rookies are #’d to just 22!
- Collect both Red and Purple parallels of the complete Base Set. Fifty-percent of the Red parallel cards feature a bounty scratch-off code and collecting the complete    Red parallel set could earn you amazing bounty award cards. More info below. All of the Purple parallel cards are #’d to 99 or less and many will feature an autograph.
- Also keep an eye out for Red, Purple and Purple Auto parallels of the Base Set Rookie SP cards, as well as Portrait and Auto Portrait variations (also with Red and Purple parallels).
- The Synergy FX insert set is back! These bright Light FX cards featuring veterans and rookies are popular with everyone - from casual fans to serious collectors. Collect a variety of colorful parallels (Orange, Purple, Green and Gold). Many of the Green and Gold parallel cards feature an autograph. All Synergy FX cards are serial-#’d and all Gold parallel cards are 1-of-1’s!
- Expanded Offering! The Exceptional acetate insert set returns with a significantly expanded parallel lineup. This set is comprised of Star, Phenom (non-rookie standouts 25-years-old or younger) and Future (rookies) subsets. There are seven parallels, four of which are #’d to 99 or less - highlighted by the 1-of-1 Gold parallel.
- New Insert Sets! The latest edition of Synergy features three new insert sets:
- Star of the Show: Current superstars on patterned (Pillars of Light) foil board.
- Postseason Brilliance: Standout players from the 2021 postseason on patterned (Pillars of Light) foil board.
- Synergistic Duos: This set featuring two players from the same organization consists of three subsets: two current stars, one current star and one legend, and one current star and one rookie. Collect both the Red and Gold parallel sets as well. Every Synergistic Duos card is serial-#’d.
- Chase the big hit, Cast for Greatness, featuring the league’s biggest superstars on an all-metal trading card! Keep an eye out for Cast for Greatness Signatures cards #’d to just 25.
- Expanded Offering, Pt. 2! The Rookie Journey insert set returns featuring three different chase cards (Draft, Home Uni, Away Uni) of each rookie in the checklist, as well as two all-new parallels - Red (#’d as low as 299) and Gold (#’d as low as 99)!
- Look for Synergy Autographs insert cards featuring veterans and rookies. Collect both the regular set and the serially-#’d Red parallel set!


Achievements to Earn
Once you’ve entered all 125 unique codes, you will earn Cast for Greatness #36 featuring Montreal Canadiens phenom Cole Caufield. As a bonus, those who complete this mission the fastest will have a shot to earn the following bonus achievements in addition to the prized Caufield card:


Next 5
The next five (5) collectors who collect & redeem the compete 125-card Base Set - Red Parallel Bounty Set will earn the complete 36-card Cast for Greatness - Gold Parallel set!


Redeem all bounty cards at UpperDeckBounty.com. For more information about the bounty program, visit the site on or after release date.