2022 LEAF IN THE GAME SPORTS NON-SPORT 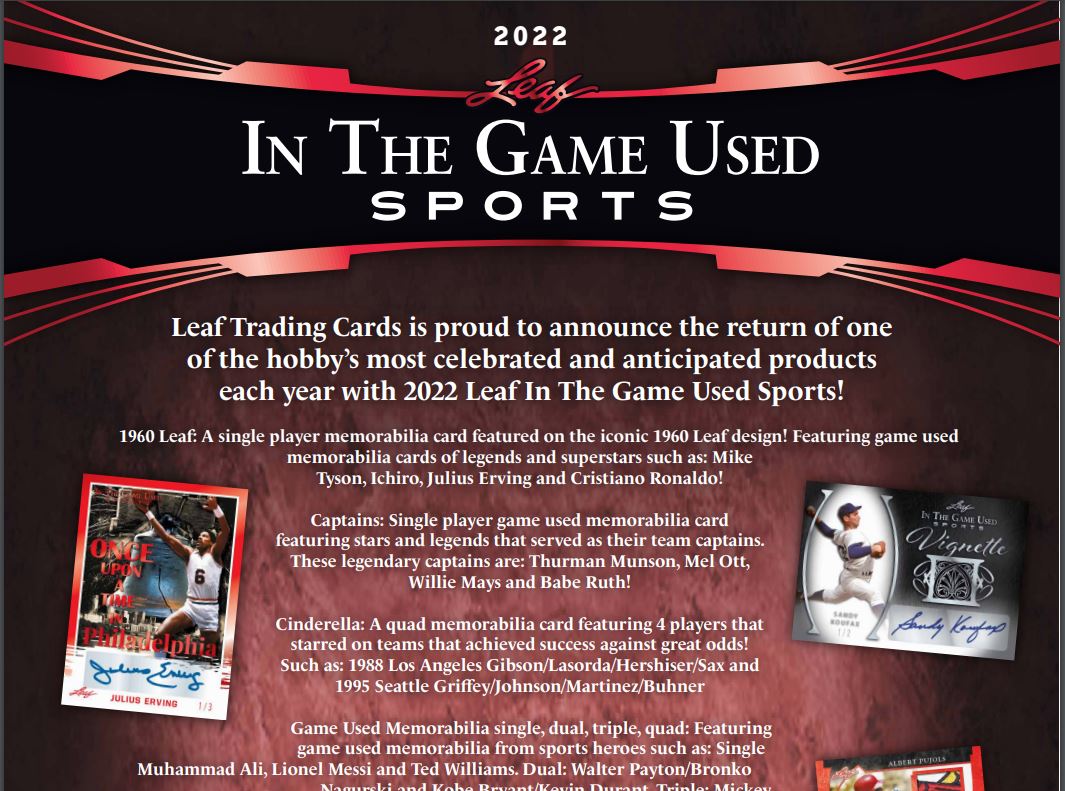 2022 LEAF IN THE GAME SPORTS NON-SPORT

Leaf Trading Cards is proud to announce the return of one of the hobby’s most celebrated and anticipated products each year with 2022 Leaf In The Game Used Sports!

Cinderella
A quad memorabilia card featuring 4 players that starred on teams that achieved success against great odds! Such as: 1988 Los Angeles Gibson/Lasorda/Hershiser/Sax and 1995 Seattle Griffey/Johnson/Martinez/Buhner

Hall of Fame Caliber
A single player game used memorabilia card featuring legends that haven’t been enshrined but probably should be! Such as: Thurman Munson, Pete Rose and Steve Garvey!

Back to Back
2 player signed double front autograph featuring teammates that were on back to back champions! Such as: Bradshaw/Lambert, Aikman/Emmitt and Magic/Worthy!

Vignette
Signed cards putting the spotlight on superstars of sport! Such as: Juan Soto, Sandy Koufax, Pele and Ric Flair!

Legendary Locker Room
A 6 player memorabilia card featuring what would be a dream locker room! Such as: Mantle/Williams/DiMaggio/Musial/Snider/Robinson and Olajuwon/Garnett/Wilkins/Parker/Magic/Giannis

In The Name Used Letter
Letters right of the back of superstar game used jerseys! Look for iconic names such as Karim Benzema, Tracey McGrady and David Beckham!

Reign of Champions
Three player memorabilia card of championship heroes! Such as: Mantle/Ford/Berra and Bird/Parish/McHale!

Ring Leaders
Single player memorabilia card that features legends that have blinding bling from all their titles! Such as: Tom Brady, Roger Federer and Mickey Mantle

Sports Lore 4
A 4 player game used memorabilia set featuring a quartet of greatness! Such as: Montana/Griffey Jr./Maradona/Tyson and Messi/Giannis/Nadal/Jeter

The Legendary 200
8 player game used memorabilia card featuring some of the greatest athletes of all-time! Look for: DiMaggio/Palmer/Tyson/Sanders/Lemieux/Kareem/Maradona/Navratilova and Marino/Ronaldo/Bird/Mays/Hull/Nagurski/Musial/Namath

One Upon a Time in...
A single player signature card exquisitely designed to feature the city the legend played for! Such as: Sandy Koufax, Julius Erving, Ken Griffey Jr., Barry Sanders and more!