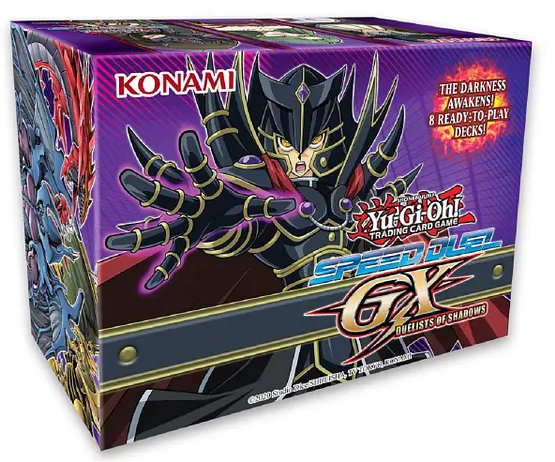 Shadows loom large over Duel Academy in the new 2023 Speed Duel GX Box*! The Shadow Riders have descended upon Speed Duel and joined forces with other villainous characters from the Yu-Gi-Oh! GX anime series to cause mayhem and unleash the mighty Sacred Beasts. This box set is designed to allow up to 8 players to jump into their own dynamic gameplay experience with 8 pre-constructed Decks along with a selection of other cards that can be used to customize them. Here are just a few of the things you can look forward to in the new box:
- 8 Pre-Constructed Decks with new Skill Cards that introduce villainous characters from the Yu-Gi-Oh! GX animated series to Speed Duel! Torment your opponent with Titan’s Chess Archfiends, solve the mysteries of alchemy with Amnael, or even reign supreme with the Supreme King’s Evil HEROes!
- New Skills that let you look at older Speed Duel cards in a new light! Try your hand at assembling Detective Zaloog’s Dark Scorpion Deck!
- Duel in style with Secret Rare versions of popular cards including the 3 Sacred Beasts!
And more!